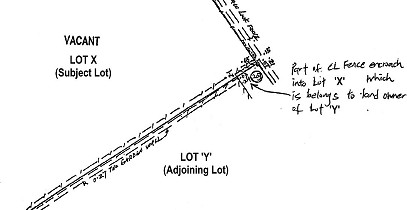 The updated sketch made by the RS subsequently is as shown in Sketch 2. The additional encroachments that were overlooked earlier are highlighted. 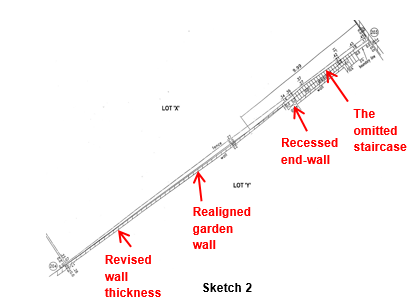 Irregularities Established
3 The irregularities established by the IC were:
(i) Omission of encroaching staircase
(ii) Garden wall was not straight throughout as documented because
a. The end stretch is recessed
b. It is kinked at the mid-length
(Refer to sketch 2)
(iii) The garden wall was only 0.15m thick instead of 0.27m as documented
(iv) The garden was found to be encroaching by 0.14m at the corner before the recess when it was earlier documented as non-encroaching
(v) Omission of an extension of the rear retaining wall onto the subject lot.

Some of the Investigation Committee’s Comments for Reference
4 The following are some comments by the Investigation Committee for references.
(a) The creepers growing on the fence could have affected visibility but they can be removed without much difficulty. It is a common situation for field assistants. The visual obstruction by the creepers can only be a mitigating factor but not a permissible excuse.
(b) Registered Surveyor’s misinterpretation or misunderstanding of verbal statements made by clients can at best be a mitigation factor. The Registered Surveyor should make the effort to clarify the issues relating to his survey to ensure they are resolved.
(c) When the Registered Surveyor signed the documents, he is responsible and liable for the correctness of the content in the documents.
(d) Even if his field assistant missed out some details due to the site condition, the Registered Surveyor is still accountable, if not liable, for the omissions.
(e) On the thickness of the wall, adequate visual inspection should have been done to confirm the uniformity of the wall thickness throughout the wall.

6 Consequentially, the Chief Surveyor issued a stern warning to the Respondent that:
(a) He is required to be fully aware of and to comply with all Chief Surveyor’s Directives and circulars
(b) He is to personally direct and supervise his staff carrying out cadastral survey
(c) He is reminded not to repeat such offences in contravention of directives, circular and related legislations.