Improper Conduct of a Registered Surveyor

The Case
1 This is a case of a datum establishment wrongly done causing errors in the positions of the constructed buildings and boundary walls.

The Background
2 A complaint was raised to the LSB by URA about firm (‘X’). Firm ‘X’ was engaged by the contractor to conduct controls, topographical, pre-computation and setting out survey for the construction of 2 pairs of semi-detached houses on 2 plots of land under two separate jobs. These were to be subdivided into 4 plots. In response to the complaint, a full set of survey report (duly signed), photos and email chain were submitted by URA which were subsequently submitted to LSB.
3 The errors were discovered by another RS during the subdivision survey.

Facts Established in the Investigation
4 Field technical officers picked boundary marks along the front portion of the lots. No marks were picked at the rear of the properties to envelope the sites.
5 The datum establishment was done in Cassini Datum based on PO-New methods. The Office Technical staff did not use all the marks and only considered three marks lying approximately along a straight line (along the front of the boundary) for computation. The 3 marks adopted were not boundary marks and caused the computed boundary to shift 1m (refer to redacted sketch plan below). 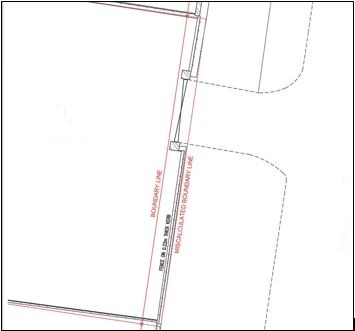 6 Prior to setting out survey, the technical field team was instructed to carry out additional survey of more marks but there is no evidence that these were being analysed.
7 The RS in charge of the project only reviewed the finished computation plan but did not review the PO & NEW analysis. There were insufficient checks in the company processes to prevent such an error.
8 The errors caused the buildings to be constructed 1m shortfall in setback and the perimeter walls 1m beyond the boundaries (encroaching 1m into State Land).