The Background
2 Upon completion of a building construction, a cadastral survey was conducted for the subdivision to vest 2 subdivided lots to the State; at the front (adjoining road) and at the rear (back lane). In the survey, encroachments were found both at the front and at the rear (See Figure 1 below). 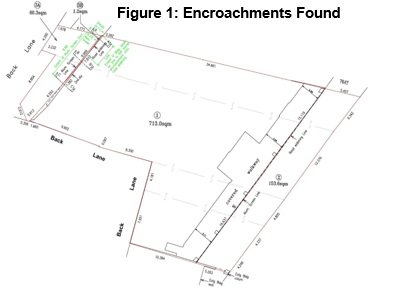 3 In response to a query by the Authority, the project architect has explained that the error arose from the wrongful declaration in the interim survey results by Registered Surveyor (the Respondent) engaged by the Contractor. Among the documents produced were the minutes of a meeting held with the developer and the Project Architect where the Contractor’s Project Manager confirmed that the interim survey report showed that the building was built within the boundary line. The Project Architect had relied on this Interim Survey report made by the Respondent as evidence of his declaration of no encroachment.

4 Consequentially a complaint was lodged alleging that the Respondent engaged by the Contractor had made a wrongful declaration on the interim survey results.

Facts Established in the Investigation
5 The interim survey conducted by the Respondent was in fact sectional profiles along the mid positions at the front and rear for verticality checks – see Figures 2 and 3 below. The survey conducted and results submitted were the ‘Verticality Building Survey’ Plans – executed under the Contractor’s instruction. It was specifically to check for the verticality of the building. 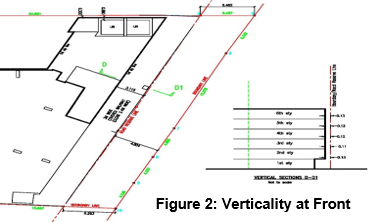 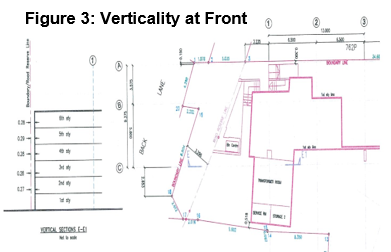 6 Being the longitudinal section along the spine of building, they were not sectioned at location where the subsequent encroachments were found. It would not have shown the encroachments in the first place and at the time, the claddings were yet to be installed.

8 The project manager could neither confirm nor affirm that he had stated the building was within the boundary w.r.t. the Interim Report. He was unable to corroborate on the Project Architect’s evidence as reflected in the minutes. The Respondent was not at those meetings.

9 It was also established that the setting out had been executed in accordance to a plan provided by the Project Architect via the Project Manager. The encroachment was already inherent in that plan for setting out. Furthermore, the Respondent was tasked to set out only two grid lines of the building.

10 In the 3 recordings of the minutes of meetings, the relevant heading used was “Interim Survey – Wall & Corridor”. No mention was made on the boundary or encroachments. No reference to any encroachment in other minutes was submitted. These collaborate with the Respondent’s statement that the Interim Survey was never intended to be an encroachment survey other than the verticality checks instructed by the Contractor.

Decision of the Land Surveyors Board
11 The Board concluded on the following:
(a) There had been no instruction to the Respondent to conduct any encroachment survey as alleged
(b) The Verticality Building Survey Plans were not encroachment survey plans and could not be admissible as evidence of wrongful declaration of encroachment
(c) No encroachment report or feedback could be confirmed to be served by the Respondent
(d) The encroachment by cladding at the front was inherent in the design provided to the Respondent for setting out
(e) There had been no disputes that all requirements in the subject minutes were complied with – saved the alleged recorded feedback which could not have been made by the Respondent who was not at the meeting, and which the Project Manager could neither confirm nor affirm having made that statement.

12 Based on the evidence as established, the complaint was dismissed.